The Schwarzsi Anomaly is a relatively small space station located in the centre of the former Savvango system, among the planetary dust. It is home to the Kerotopsids and their creations. It is referred to as the Schwarzsi Space Station and Schwarzsi Sphere by the natives. It is located within the Triangulum Galaxy.

The Schwarzsi Anomaly is a space station located in the centre of the Schwarzsi system, and it acts a dyson sphere around the Black Hole formally identified as Object 3-BBBBBB (informally referred to as Three-Six Bee, formerly known as the Savvanago Star). The dyson sphere operates by firing light into the ergosphere of the black hole, such that the singularity transfers some of its rotational energy into the light causing it to perpetually gain energy which is then siphoned back out by the space station.

The entire anomaly is only 120 miles across at its two furthest points.

Exactly 100 Savva-6 days after the 3-BBBBBB Black Hole was formed, the Schwarzsi Sphere enveloped the entity in its entirety. The black hole had been observed by many races across the Triangulum Galaxy, including the Technomimi, however none of them saw the device being constructed or transported. More worryingly, no one had every heard of the Kerotopsids prior to their occupation of the completed station.

The Keroptopsidians are a friendly and welcoming people. Though they rarely leave the Scharzsi Station, they are encouraging of anyone who tries to visit them. However, due to the immense gravity affecting the entire anomaly very few survive the trip. This has led to curious races attempting to build probe units to visit the station to learn of its inner workings, however getting friendly enough with the locals to discover anything has proven very very difficult as they view the probes as insulting, preferring to meet the explorers in person.

The Schwarzsi Anomaly is named after Karl Schwarzschild, famed science dude who did the stuff to do with black holes. 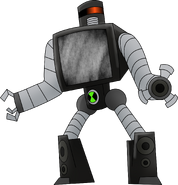