Ben 10 Fan Fiction Wiki
Register
Don't have an account?
Sign In
Advertisement
in: Aliens, Ray 10, Aliens in Ray 10,
and 12 more

Sandbox is the Codon Stream's sample of a Dustressfone from the planet Cleanissomess. (This word can be split into clean, is, so, and mess.)

He was 1st mentioned in the Original Series episode Ken 10 by Ben 10,000, but has not made a physical appearance in the cartoon series yet.

He can camouflage in sand.

Water (and anything related to it).

Sandbox was first used by a twelve year old Ben in Galaxies. He has the Omnitrix symbol on his arm and uses his original design by a user on DeviantArt.

In Ken 10: Another hero his appearance is taller and he's more stronger. he appeared in the episodes The Rise of a Hero, Animo Animal, and Doom of the Day, where he punched Ultron with his fist.

In Ray Alien Squad, Sandbox is a sand golem which can camouflage into sand, fit into small spaces, choke his enemies, almost indestructible and space shifting. It is a hybrid which appeared into season 2.

Sandbox is set to appear in Ben 10 - Infinity. It can merge with sand as a way of camoflauge, attacking enemies with surprisingly good strength. The Sandstone which has formed on its head and back act as a way of defense, and it can shapeshift to fit through tight spaces and morph its body for combat. It is also very wise and resistant to heat.

He resembles in Nemeverse, but the green plugs are gone, and he is wearing a green and black version of his black and white Aliens Unleashed clothing. The cannon-like plugs on his chest remain, and the Omnitrix symbol is not on the box. Instead, it is on his shoulder. When the box is closed, it is on the lid. 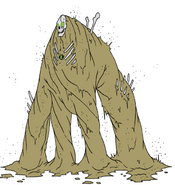 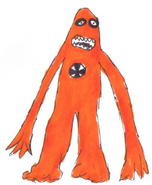 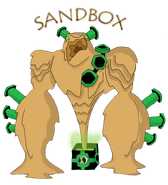 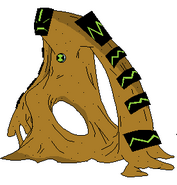 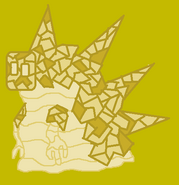