SD-1, dubbed Sadie by Ben, is a next generation Pixi Artificial Intelligence Hologram built by Azmuth to accompany Ben on his galactic road trip in the Stardust. She exists in the prime timeline of Earth-1010 and appears in the series Ben 10: Road Trip.

SD-1 is a light blue Pixi-type AI Hologram. As such she has a large projected square head with sharp angular features. She has large eyebrow-like antennae and a thin strip resembling a hair band across her top right corner. Physically she is projected from a terminal in the main control panel of the Stardust, but realistically the entire ship acts as an extension of her body.

Sadie has a friendly disposition to new faces, however when annoyed she becomes sharp and agitated. She can be sarcastic and unhelpful when she wishes, and acts on her own free will as opposed to being obedient like most of her kind.

SD-1 possesses a great amount of knowledge about the universe and the ten aliens that Ben initially had access to. She also knows the inner workings of the Stardust intimately.

She can communicate wirelessly with any wireless technology, especially those with an in-built A.I. In The Only Good Necroterran this ability was shown to extend to being able to override other technologies and take control of them. She used this ability to turn a Techadon Degradation against its comrades.

In Time Trials she revealed that she was not bound to the Stardust, and was in fact free to leave at any point with her body hidden inside the main console of the ship. 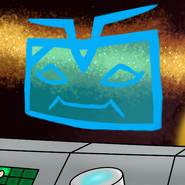 Sadie and her mind-controlled Velosabre Degradation in The Only Good Necroterran.
Community content is available under CC-BY-SA unless otherwise noted.
Advertisement