Ryder is a character in the series, Mutant Drake, and the titular protagonist of its spin-off series, Ryder.

Ryder takes the appearance of a young man, wearing a black, leather jacket over a grey shirt with blue jeans and black boots. He has long, black hair and blue eyes. There's a dragon tattoo on his wrist.

Ryder has the ability to transform into his mutant form, giving him a wolf-like humanoid appearance with dark grey skin, small spikes protruding from his face, a long black mane resting on his back, hind legs, visible black claws and long pointed ears. He's also wearing a black and white tactical outfit.

Ryder has a tough character. He's troubled, thorough and relentless. However, he's not completely inhumane. He's often snarky and blunt. He also has an compassionate side; keeping people from being like him and trying to help others. He's also sharp minded as he is able to put clues together, uncover secrets and organize a strategy based on what he knows.

In his Mutant form, Ryder's characteristics seem to vanish and are replaced with animalistic instinct. He does however retain his thoughts although his control in this form is questionable.

In his regular form, Ryder is reasonable, if not average, at hand-to-hand combat. He also has investigative skills, which grants him the ability to observe and organize facts gathered from a person or place. Ryder also has the ability to summon his Mutant form, gaining enhanced strength, stamina, durability and agility. He also becomes faster and can use his animalistic features, such as his claws, to attack his enemies. When injured, his healing factor kicks in, healing his wounds within seconds.

In his Human form, Ryder is exposed to many threats which can wound and possibly kill him.

In his Mutant form, if defeated or weakened enough, the form can diminish, returning Ryder back to his Human form. In this form, high frequencies can stun and even weaken him.

During his teenage years, Ryder attended Arbiter High and spent his time there as a quarterback in the football team. He often hung out with a young Jessica Kelly.

At some point afterwards, he lost his parents in a devastating accident which forever haunted him for years to come.

At one point in his life, Ryder became a private investigator.

Since the experience, Ryder went after everyone connected to the killing and traced them back to Anton Reeves. Once he knew this information, he hunted down the man and planned to kill him and everyone he knows as revenge for his family.

While investigating Reeves, he came across Drake who worked out a deal with Anton involving a flash drive. From his point of view, Ryder assumed Drake worked with Anton and that the flash drive was important information that shouldn't be in his hands. Ryder then proceeds to trail Drake, realizing that incidents involving the Vigilante are connected to Drake and the news van. He took pictures of them are every stop from a distance. In Black Hills Forest, Ryder was spotted by Drake. With no other choice, he lured Drake away, posing as Reeves, and attacked him in a museum. When Kate Wilson arrived to check up on Drake, Ryder took her, leaving behind a trail so he can be followed. Once Drake found him, the two fought but Ryder was ultimately defeated. However, Kate spoke up for him and both Ryder and Drake worked together while attempting to stop Reeves from making his deal. While the deal did go south, Reeves managed to escape, bringing anger to Ryder. He then took the flash drive and left the three so he can discover new leads in order to find more dirt on Reeves.

During his investigations, Ryder found himself back in the city. Although it is unknown if he was present before it had begun, he was there during the Xyrion Invasion and helped fend off the Xyrion soldiers in his mutant form, saving lives along the way.

After the imprisonment of Anton Reeves for his participation in the Xyrion Invasion, Ryder fell into a depressive state when he discovered he no longer had a purpose in life. He became a drifter, constantly moving from place to place and even finding work in a poorly managed restaurant after ending his investigation business. His informant, Raggy, had checked up on him and constantly worried about his living conditions which Ryder had paid no attention to. When returning home, he came across his old friend, Jessica, who had a problem involving a dark monstrous creature attacking her during the night. Despite his instincts, Ryder decides to look into her problem and discovers a criminal operations involving the distribution of drugs that grant its user mutant abilities. After facing off against a mercenary from his past and a dirty cop, Ryder finds the strength to transform and kill the officer in his mutant form.

After a couple of days, Ryder managed to get his life turned back around by cleaning up his apartment, paying off his debts and getting back into the investigation business with the help of his friend.

While Ryder claims his acts of vengeance are to honor the memory of his parents, when he was younger he did not feel as much care for his parents as he did after losing them in a devastating accident.

Being friends since they were younger, Ryder reuniting with Kelly after so many years was something that had brought light into the darkness of his life. While he was conflicted with his own depression at the time, he did also want to help her and obviously showed signs of caring for her when she was troubled and possibly in danger. As Ryder had claimed later on, she was the most pure thing in his life and just having her around was enough to snap him out of his depressive funk and regain the strength to fight and live another day.

While he hasn't treated him much as a friend, Ryder's attitude towards Raggy seems like one of a business relationship rather than something personal but the two do seem to understand each other and get along, making Raggy the closest thing to a friend for Ryder.

While he initially thought Drake was one of Reeves' lackeys, he saw past it when knowing the truth, that Drake wants to help as the Vigilante. However, their perspectives of justice are different, so they may never see eye-to-eye but, at the moment, they are on good terms.

At first, she was a captive, taken by instinct, but after hearing what she had to say, Ryder felt a connection to his compassionate side with her. He opened up to her about what happened to him especially since she already had an idea. Later on, Ryder went on to visit Kate, hoping that she can help him find his compassionate side again and get advice on how to live his life like a somewhat normal person like herself. This just shows that he appreciates Kate for who she is and that their relationship is far more complex than it appears to be.

Ryder absolutely despises Anton Reeves solely because he had his parents murdered in front of him. He does not rest until the man is killed by his own hands in order to provide vengeance for his family.

Ryder will appear in every episode as he is the main protagonist of the series. 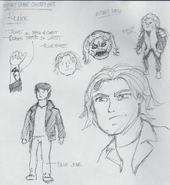 Ryder Concept Art
Add an image to this gallery
Retrieved from "https://ben10fanfiction.fandom.com/wiki/Ryder_(MD)?oldid=836961"
Community content is available under CC-BY-SA unless otherwise noted.