Rockslide is the Infinity's DNA sample of a Gorun'd from the planet Rublem in Bryce Bowman: Origins.

He stands over most of Bryce's other transformations, at twenty-feet-tall.

Rockslide, as his name suggests, is composed entirely of living rock.

His arms are quite large, even for his size, thus he rarely lowers them to his side.

Likewise, Rockslide's teeth are massive, and make closing his mouth difficult. Though, not impossible.

Most of Rockslide's height is in his torso, as his legs are fairly short.

He has blue eyes.

The Infinity appears on his back, in between his shoulder blades.

Bryce's arm is illuminated in green light from the Infinity, as rocks of varying shades of red and brown tumble out of the light from the Infinity across his arm and up toward his shoulder then all the way over his head. The rocks on his head shift and morph into Rockslide's face as he roars. He spins while a second pair of arms grows out of the sides of his torso. Then, the swings his arms in front of his body, one pair at a time, then pulls them back to pose.

This is being amended during the reboot.

Rockslide's main ability is his incredible strength. He uses it to create powerful shockwaves, either by clapping his hands together or by slamming his hands into the ground, creating a minor earthquake.

These shockwaves have been shown to shatter all the glass in a five block radius and knock opponents back several meters without even being within arm's reach of Rockslide.

His earthquakes are minor, although still devastating. They can crack and crumble pavement, concrete, and do significant damage to ground-based structures.

If he wanted to, Rockslide could level a medium sized building with an earthquake, although he would have more success with a direct hit.

Rockslide can manipulate pieces of earth around him, to a minor degree. He mostly uses this to strike enemies with small boulders and rocks from a range where his shockwaves might not be effective.

Rockslide is remarkably durable, able to tank attacks from some of Bryce's toughest foes. He's been shown taking direct hits from Esotericas' energy bolts without even flinching.

Rockslide is massive; very tall and very bulky. He struggles to fit inside anywhere made for humans and human-sized beings.

His arms are also a big issue. Being considerably large, even for his size, Rockslide has to keep his arms in front of him most of the time. While he can lower them to his side, they still stick out a good bit.

Rockslide can't use his abilities inside buildings he could fit into, for fear of collapsing the building around him. He also can't use his primary ability with bystanders around. Using his strength solely for fisticuffs is fine, but he's hardly built for it. 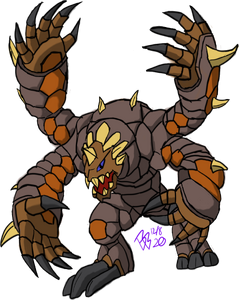 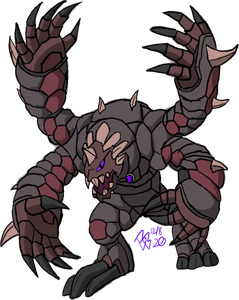 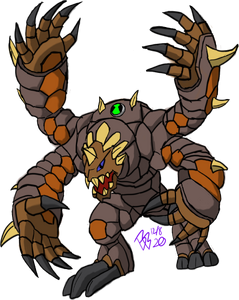