Rockplant is a alien in the series Den -10 and Simien 10: Blood Monkey, in Ned's Positrix and in Vorkus's Hexatrix respectively. His opposite alien is Tnalpkcor.

Rockplant is a large humanoid being made out of large rocks connected together as limbs. His head a large stone with two green eyes and a small mouth.

Rockplant's stones are connected with multiple thick green vines which also run across the rest of his body. These vines can move and stretch freely while still connected to his body when used to attack.

In Simien 10: Blood Monkey, Rockplant's typing quirk is capitalizing a random vowel in each sentence.

Being made of stone, Rockplant is naturally highly durable.

Rockplant's body is covered with vines which are fast, stretchable and prehensile. Rockplant has full control over these vines, allowing him to use them to attack. These vines can regenerate quite quickly.

Rockplant has a degree of plant manipulation, allowing him to control nearby plant life.

Rockplant can regenerate his cut off vines, and his vines can help him reconnect his broken shards of stone.

Rockplant can fire out shards of stone from his own body as a weapon, although this can damage him as well.

In extreme cold or other extreme conditions for life, Rockplant's vines can die, leaving him much weaker.

Rockplant's body is composed out of stone, meaning sound, water and drilling attacks can be incredibly effective versus him. 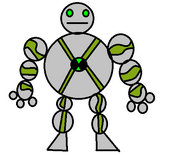 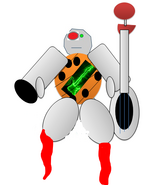