Start a Wiki
Ro-Warasaur is an alien transformation used in the show, Brandon 10.

In The Original Series, Ro-Warasaur is a big, green dinosaur-like alien with two grey canons (with red interiors) on his shoulders. He has a big, grey shell on his back, five green chest plates on his chest, black finger-less gloves, a black/dark blue helmet with spikes and a tail. The Omnitrix symbol is on his chest.

In Ultimate Hero, Ro-Warasaur remains as a big, green humanoid dinosaur like in The Original Series. He now has a different shade of a green and four chest plates. The cannons on his shoulder now have shinier grey coloring and seem mounted onto his shoulder like pads; the inside of the cannons are still red. He has metallic hands rather than finger-less gloves. His feet now have more toes than two. He still has the two horns on the side of his face and on top of his helmet but the head horns are smaller and more towards the sides. His tail is also green now. The Ultimatrix symbol is on his chest.

Ro-Warasaur has the power to shoot explosive cannonballs from miniature cannons upon his shoulders. He also has super strength, durability and enhanced size. As seen in The Ultimate Enemy, Ro-Warasaur has the ability to fire lasers from his hands.

Due to his scale, Ro-Warasaur's weight slows him down and could cause him to sink when standing in a sinkable environment. 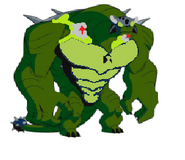 Ro-Warsaur in the Original Series Titles

Ro-Warasaur in Brandon 10: Hero of Earth

Ro-Warasaur in Playtime
Add an image to this gallery
Retrieved from "https://ben10fanfiction.fandom.com/wiki/Ro-Warasaur?oldid=866299"
Community content is available under CC-BY-SA unless otherwise noted.