Ripjaws is a large shark-like humanoid with a huge jaw sporting rows of sharp, visible teeth.

Ripjaws is a powerful swimmer, able to turn his legs into a single mermaid-like tail. He has an incredibly string jaws with razor sharp teeth capable of bending steel. He can breath underwater.

Ripjaws needs water occasionally or he risks dehydration. As he has gotten older he has become more skilled at staying out of water for prolonged periods.

Ripjaws was unlocked by scanning a Pisciss Volann Gladiator in the Blue Pavilion Arena in Tides of War. 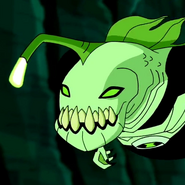