Ricochet Ricochet, better known as Sonic Scream is the Atomnitrix's DNA sample of a Sonorosian from the planet Sonorosia.

Ricochet Ricochet is a small white alien whose body is a living amplifier. He is actually living sonic waves contained in a suit made of silicon. His eyes are line-like and has two black stripes on both of his ear plugs. His legs are a bit stubby and has medium sized blue circles covering most of his hands. He is a bit taller than the average human child and has a hexagonal shape on his stomach. His voice sounds robotic, and it echoes, as if he is speaking through a portable microphone.

Ricochet Ricochet can scream at audible to ultrasonic frequencies capable of overloading machinery and stopping projectiles in mid-flight.

Ricochet Ricochet has the ability to duplicate himself, like, Duplex , but different in that the clones aren't linked in any way, allowing entire groups to be knocked out without harming the rest and he can clone himself much faster than Duplex can.

Ricochet Ricochet can detect vibrations in the ground.

Using his sonic screams, he can use echolocation.

He has channel vibrations to enhance his screams.

He can transmit sound waves through speakers (such as phones).

He can use his sonic screams to create a forcefield.

He is quite agile and can jump really high.

Ricochet Ricochet has a fragile body which can be detroyed easily in battle. 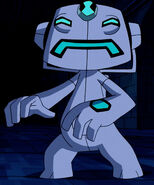 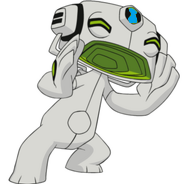 SonicScream's old/rejected Design.
Add an image to this gallery
Retrieved from "https://ben10fanfiction.fandom.com/wiki/Ricochet_Ricochet?oldid=898972"
Community content is available under CC-BY-SA unless otherwise noted.