Revonnahganders are feline-like violet furred aliens with pointed elf-like ears. Their hair can be black, white, or purple. They have cat-like pupils and large pointed upper canines.

Young Revonnahganders have tails, which fall off at puberty.

Revonnahganders have a prehensile tail before puberty although it takes a great deal of effort to control it.

Despite having feline features, Revonnahganders are able to resist anyone with the ability to mind control cats.

Revonnahganders are shown to have above average agility and can jump high distances. 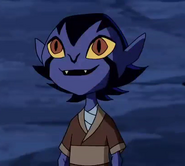 Retrieved from "https://ben10fanfiction.fandom.com/wiki/Revonnahgander?oldid=780359"
Community content is available under CC-BY-SA unless otherwise noted.