Rath is the Omnitrix's DNA sample of an Appoplexian from the planet Appoplexia set to appear in Bryce Bowman: Devil's Bounty.

Rath is about nine feet tall.

He resembles an orange and white bipedal tiger with one claw coming out of each wrist.

He has no tail.

He is also muscular and has red eyes.

He has stripes on his shoulders, head, legs and upper body.

He has a white jaw, neck, chest plates, hands and feet.

The Omnitrix is located in the center of his chest.

Bryce's veins expand around the Omnitrix while it glows brilliantly. The veins keep expanding, up his arm, while orange fur starts to grow out of the creases in between his veins. This continues up his arm and to his face. His mouth opens in pain, while his teeth sharpen and elongate. He roars, powerfully, while his head is taken over by orange fur. The knuckles on his right hand, now totally covered in orange fur, split and a black claw tears through the skin. Rath spins around and poses with his arms out to the side, fingers flexing, and roaring at the top of his lungs.

Rath was unlocked by Azmuth in The Darkest Night: Part Two.

Rath first appeared in The Avengers where he handily defeated the Rhino.

Rath possesses enhanced strength and agility, enabling him to jump great distances and lift objects heavier than himself.

Rath possesses a large, retractable black claw on each wrist. This claw can be used to stab and slice opponents or to create a shock wave when stabbed into the ground. Whenever Rath gets determined or angry, his claws seem to grow larger.

Rath is extremely durable, able to take a point-blank laser blast with no apparent effect and survive a free fall from several hundred feet in the air with only a bit of dizziness as a result.

Rath can also release a loud roar, although this seems to be more of an intimidation tactic rather than an offensive feature.

Even though he is not one of the smartest of Bryce's aliens, Rath can perform fighting moves with expert execution

Rath's brain is hardwired for aggression and as such, Rath's only known weakness is his lack of intelligence and highly aggressive temperament. This causes Rath to become easily distracted and difficult to stop once he starts fighting.

Rath's apparent lack of intelligence also may convince him to needlessly argue with inanimate objects.

Rath is afraid of water, like most actual cats, but unlike actual tigers.

Rath, being feline based, can be controlled by people that have the ability to control cats. 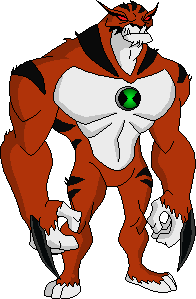 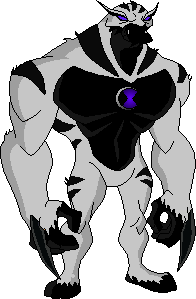