Start a Wiki
Random Pixel Art Guy is an unused alien that anyone can use. I created his pic because I was really bored. He appears in EBFA.

He has a lot of appearances.

He looks like this weird blue guy with some blue color all over him.

YOU ARE HIS BIGGEST WEAKNESS BECAUSE YOU ARE SO UGLY 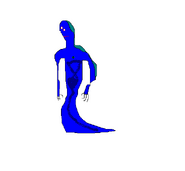 Omi
Add an image to this gallery

Retrieved from "https://ben10fanfiction.fandom.com/wiki/Random_Pixel_Art_Guy?oldid=866245"
Community content is available under CC-BY-SA unless otherwise noted.