Ra'ol Set is the leader of the Salimorian bounty hunters and a member of the Elite on Earth-19.

Ra'ol Set is 6 foot 7 and very well built. He wears armor that hides all of his skin except for his eyes. Even when he is not wearing his armor, as seen when he is in Incarcecon in Pilot, Part 1 and 2, none of his skin can be seen as he is wearing the jail robes and a bandanna. He wears a metallic bandanna around his mouth that blocks it from any attack. Most of his armor is dark red in color, but his chest plate and back are black. He wears a helmet that protects the back and top his head that also has a visor that protects his eyes. He is not always wearing the visor and has only been seen with it once during the events of Unit Test. He wears boots made out of a very dense metal that prevent him from being pushed over easily. These same boots also have rocket engines in them 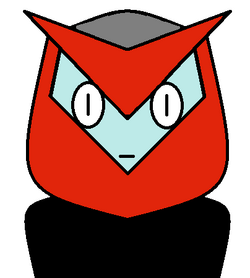 Although not known for his brains, Ra'ol Set has always known all about weapons. He joined the Elite solely so that he could become more powerful than he already was.

On the 25th, Ra'ol was broken out of his special cryostasis pod at Incarcecon by Blitz. Afterwards, he retrieved his gear from the holding room. He then began to fight the Magisters who had arrived to stop the break out, namely Lotin. Eventually, he was recaptured by the Magisters and placed back in his cryostasis pod.

Later on, he is mentioned by Sci in Assembly when he is stated to be the crown prince of Salimore. When his father dies in Warning Signs, Ra'ol becomes the king.