REO looks like a giant Oreo with no mouth and one eye. His shoulders are sideways Oreos, with cream hands and chocolate thing legs.

The Viking Førm øf REO, REØ 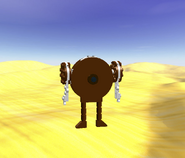