Quackstion is a DNA sample of an unknown species from an unknown planet.

He resembles a humanoid duck in a green suit that has question marks on it.

He still resembles a humanoid duck in a green suit, but now he has a red cape and black finger gloves

He tends to give his opponents riddles using his enhanced intelligence. He also poses enhanced strength, agility and speed.

In his matured form, he can levitate a little above ground, but he has a hard time moving while levitating.

If someone answers his riddle correctly he usually gets confused. While he possesses enhanced strength, it's not as enhanced as a tetramand's or an appoplexian's. His speed also isn't very high. He has trouble moving while levitating. 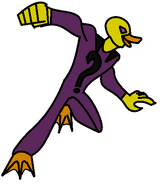 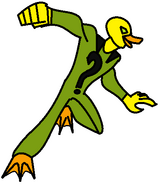 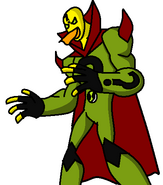 Matured Form
Add an image to this gallery

Retrieved from "https://ben10fanfiction.fandom.com/wiki/Quackstion?oldid=883032"
Community content is available under CC-BY-SA unless otherwise noted.