QK-N stands like a female Kineceleran like Gwen’s Kineceleran form. He has white skin. He has back-length black hair with a fringe over his left eye. He wears a long grey coat, a black t-shirt, and green pants.

QK-N stands upright. She has longer, fluffier hair. She has long striped torn sleeves. She is wearing a black dress with a jagged hem.

He has the same speed powers as all Kinecelerans. His legs are powerful, so he can kick hard as well.

His helmet is indestructible, so it can be used as a battering ram. This makes QK-N stronger than most Kinecelerans. His cybernetics give him stronger kicks and faster speeds.

QK-N is used in And Then There Were 13 and fought Vilgax’s drones.

In Tourist Trapped In Mascot, QK-N fights the Mascots and Megawhatts.

Violet turns into QK-N in Inspection 13.

In Mitsuki 13, Derwin 13 once again uses WK-N for travel as does Mitsuki. 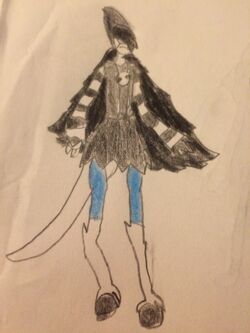