Psychophagus is the Infinity's DNA sample of a Thep Khufan from the planet Anur Khufos in Bryce Bowman: Origins.

Psychophagus’ body is entirely composed of tan bandages. They wrap around each other, giving him the appearance of a mummy.

He wears a gold and black headdress along with black greaves and black arm braces.

In between cracks in the bandages, blue light creeps out, the same blue as his eyes.

He wears an Egyptian skirt-like thing around his waist.

While the Infinity glows with brilliant white light, bandages wrap around Bryce's arm, coming from the light, and continue until they reach his head. They cover his head completely, then two bright, blue eyes peer out from the cracks. Psychophagus jumps backward then thrusts his head back while slightly raising his arms, while he and the rest of the scene are swallowed by green light.

The Mummy's DNA was scanned when he attacked Bryce and touched the Infinity in Under Wraps.

In Agent's Assistants (Episode), Bryce used Psychophagus to fight Manny and was successful.

In Darkness in the Air, Psychophagus was used to defeat The Wolf before switching to Frankenstrike to fight off The Mummy.

In Charmed, I'm Sure (BBO), Psychophagus fought Kevin briefly before being called into the line of duty.

In The Darkest Night: Part One, Psychophagus was used to defeat the Circus Freaks.

In Nemesis' Revenge, Psychophagus was used by Nemevoc to defeat York, Washington, and Wyoming.

Psychophagus, being composed of bandages, can reshape his body at will. This allows him to split himself apart to dodge attacks and reform to counter-attack.

Psychophagus can recover from many types of injuries, including being torn into confetti by a large fan, almost instantly.

He can extend his bandages, from his fingers or from his body, creating a sturdy wall. He can also sever the bandages he extends.

Although Psychophagus is frail, he has some degree of enhanced strength, allowing him to lift objects and people with his stretchable limbs, and is also able to punch away one of Vilgax's Squid Monsters with ease.

His composition also allows him to survive in the vacuum of space.

By reducing himself down to single bandages, Psychophagus can slip through extremely tight spaces or small openings. This allows him to escape various traps or maneuver through cramped areas.

He can break his body apart to create a pile of bandages to cushion a landing. His face is separated from the rest of the bandages in the process.

When extending his limbs, or other parts of his body, Psychophagus becomes susceptible to strong winds and suction forces.

There is an upper limit to how much tension his bandages can withstand before breaking.

Psychophagus can also be tangled up in his own bandages.

He can be stepped on and squished, stopping him momentarily. 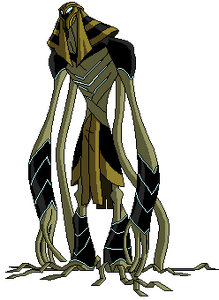 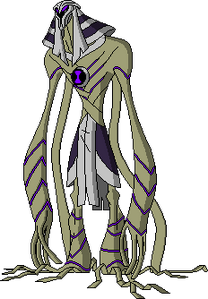 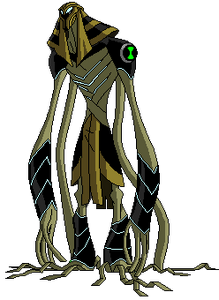