Proto is a Cybertronian from the planet Cybertron in Bryce Bowman: Origins.

Proto is a mechanical humanoid, about twenty feet tall. He has long mechanical 'tails', that Bryce calls "dreadlocks", extending from his head. He has large shoulder pieces that stck out from his arms. Proto is a shy being, having lost his memory and basic thinking abilities. He is at first seen as a threat, but is later found out to be scared. He has a tendency to activate his arm cannons when afraid.

Proto exhibited a calm and seemingly collected personality all together, despite his amnesia.

Proto first appeared in Protoform when Bryce helped him as best he could, although there was not much he could do. 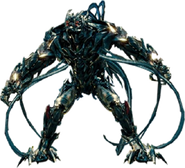 Proto as a Chevy: Corvette, Stingray