Professor Paradox is a hero in Death of Ben 10 and Ben 10: Reboot Revolution. He first appeared in DoB10 Prologue. He is an immortal Human originally from Earth. He originates from the Prime Timeline of Earth-1010.

Physically, Paradox is a middle-aged man with short black hair and grey eyes. He wears a white lab coat with a pair of goggles hanging around his neck. Underneath that he wears a white shirt with a black tie and a brown overcoat. He also wears black trousers and shoes.

Professor Paradox is calm and serious, but also sarcastic. He often acts mysteriously, though he usually explains himself later.

He is not affected by the passage of time. He cannot be aged, and his age cannot be reversed. It is unclear what would happen if someone attempted to freeze him in time.

He has an immense knowledge of time and the universe, and can find temporal 'shortcuts' with ease.

Using his Chrono Navigator other people can travel alongside him.

He can not escape paradoxes that would consume him without taking action.

Prior to Death of Ben 10, Professor Paradox's arch-enemy was Eon. On numerous occasions he defeated Eon in defence of the multiverse.

During the events of Ben 10: Omniverse he helped lead an army of Omnitrix wielders against Eon and Vilgax's own army of Omnitrix wielders. This battle, known as the Eon Crisis, resulted in an almost total destruction of the multiverse save Paradox himself, No Watch Ben, Ben Prime's Omnitrix, No Watch Ben's timeline, and the past. Professor Paradox managed to teach No Watch Ben, now wearing Prime's Omnitrix, to revert the effects of Vilgax's Chronosapien Time Bomb - restoring the multiverse.

Professor Paradox is the first to learn of Ben Prime's upcoming and untimely demise at the hands of Apollo. He later managed to recruit his long-standing arch-enemy Eon to help in attempting to save Ben Prime.

In Chapter 8 he recruited many alternate Bens to help the cause and in Chapter 12 he enacted his plan, successfully saving Ben Prime's life. In Chapter 15, Paradox used his power to boost Clockwork's and help him disperse all of the alternate timeline characters elsewhere. In Chapter 17, he helped send escaped Pyronites back to Pyros.

Paradox first reappeared in Chapter 5. He showed up at the end of the chapter to tell Ben Prime and Ben Delta where they had arrived. After explaining the context of their situation, he then returned the pair to the Prime Dimension and promptly left them. In Chapter 7 he confronted Timekiller before fighting and losing to him. 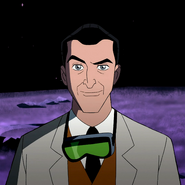 Professor Paradox in Eon's Dimension in Reboot Revolution Chapter 6
Add an image to this gallery
Retrieved from "https://ben10fanfiction.fandom.com/wiki/Professor_Paradox_(Earth-1010)?oldid=862258"
Community content is available under CC-BY-SA unless otherwise noted.