The Powerhouse Pilots are a colony of three surviving Faratin that inhabit and operate Ben's alien Powerhouse. They exist in the Prime timeline of Earth-1010.

The Powerhouse Pilots are all nearly identical in appearance, aside from one who is slightly younger and smaller than the other two. They are all beige-coloured worms with eight small limbs near their front. They have sharp beaks and beady eyes. They each wear a metal augmented jacket on top of their exoskeletons. They are fairly small.

Their names are currently unknown, with only one having been seen outside of their dreadnought, making them presently impossible to distinguish. The one that has been seen has seemed shy and negotiable.

All three of them are expert pilots and coordinators, able to receive and act upon orders with minimal delay.

Outside of their dreadnoughts, the Faratin are incredibly vulnerable.

According to Azmuth they don't fare well in our atmosphere.

The Faratin approached Azmuth specifically to ask him to put them into the Omnitrix. These three are among the last of their kind, with the Faratin as a whole being considered officially extinct. They are stored inside the Omnitrix in the same way that Ben is while transformed, not as a string of code representing his genetic makeup but instead as a 'screenshot' of themselves at the given moment prior to being stored.

The Pilots first made themselves known in In The Shadow Of Vilgax when one was caught in the process of trying to repair Powerhouse after the latter was sent offline due to a fall.

They return through voice only in Life On Mars to talk to Colony Theta and Sigma. This breaks a lot of the agreed-upon rules for their inclusion in the Omnitrix, but was of utmost importance at the time. 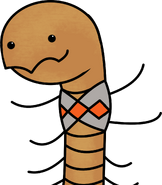