Powerhouse is the Omnitrix's DNA sample of a Fulmini from the planet Fulmas set to appear in Bryce Bowman: Devil's Bounty.

There are four retractable spikes protruding from both of his shoulders.

His arms are rather large, stretching down nearly to his feet in resting position.

His arms, chest, and legs are rock-like. His eyes are blue-grey and a moss-like substance can be seen around his neck and shoulders.

Powerhouse wears the Omnitrix on his chest.

The Omnitrix sparks with blue energy, which then reaches out and pulls a small, black rock onto it from seemingly nowhere. This happens again and again, each time becoming exponentially faster. Bryce spins around, hie whole body being bombarded with black rocks, guided by arcs of blue energy until he's completely hidden in a ball of black rock. The ball explodes; blue energy taking shape of a tall humanoid and only retaining a few pieces of the rocks, on his arms, legs and chest. Powerhouse claps his hands together, then slowly pulls them apart, dragging arcing blue energy between them.

Powerhouse has the ability to release strong, blue energy charges from any part of his body, which he can use to construct various weapons and tools such as a boomerang or a shield.

Powerhouse is able to absorb external sources of energy.

Powerhouse can power up and enhance machines with the use of his energy.

Powerhouse has incredibly durable stone armor and possesses a great deal of physical strength, although it is not his defining attribute.

Fulmini are capable of creating wormholes, but this is not something Bryce knows about.

Powerhouse can inadvertently give his enemies an energy boost if the machine he is charging up is a trap for his power to siphon through.

Powerhouse is vulnerable to being controlled by a superior member of his species.

Powerhouse's constructs can unintentionally burn humans who come in contact with them.

Powerhouse is hindered by his size- only mildly- and his weight from the stone armor curbs his agility. He can still run, jump, roll, or leap to avoid attack, but it's not something he will do often. 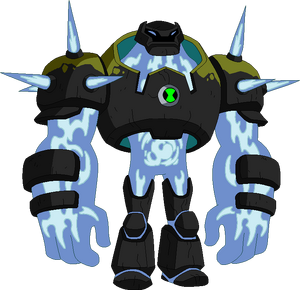 Powerhouse
Add an image to this gallery

Retrieved from "https://ben10fanfiction.fandom.com/wiki/Powerhouse_(Earth-90)?oldid=884443"
Community content is available under CC-BY-SA unless otherwise noted.