Powerhouse is the T2 Omnitrix's DNA sample of a Colony-Class Faratin Dreadnought in Earth-1010. He is piloted by a colony of three Faratin pilots.

Powerhouse is a tall, heavily built humanoid robot by appearance. His forearms and head are bright orange, with orange bands around his biceps. A small rectangular screen takes the place of his 'mouth' displaying soundwaves of the noises he makes. He has two silver antennae. The Omnitrix symbol is on his chest.

Powerhouse's main ability is his electrokinesis, allowing him to generate and manipulate electricity.

Being mechanical, he is highly durable and possesses great strength.

Powerhouse's most obvious weakness is his inability to communicate vocally.

He is also vulnerable to electromagnetic pulses.

Although he can move underwater, he can short-circuit himself is he attempts to use his electrokinesis while submerged.

As revealed by Ozai in The Only Good Necroterran, Powerhouse is not totally immune to electrokinetic attacks.

Powerhouse debuted in Burning Bridges, where he terrorised Pakmar into telling him, Kevin, and Gwen about The Blacksmith. He discovered that he could not talk, but also quickly learned of his electrokinetic abilities, using them to burn some of Pakmar's plants. He was used again in In The Shadow Of Vilgax to rescue a young girl from a burning building, however was sent offline after jumping out of the building through a wall. When he came back online he discovered that he was being piloted by several autonomous beings, before getting sidetracked in trying to prevent Artraxx from being elected president of Vilgaxia.

He was used again in The Only Good Necroterran. Ben tried to use him to fight Electrockutioner, however Ozai forced him to use Frankenstrike instead. Powerhouse ambushed Albedo later, but was outmatched by Espionage and Ben was forced to switch to Fanfare. He was used in Dead London to fight the tomb creature, but was easily defeated and knocked unconscious. 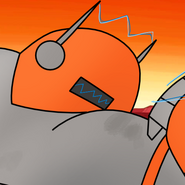 Powerhouse in Burning Bridges
Add an image to this gallery

Retrieved from "https://ben10fanfiction.fandom.com/wiki/Powerhouse_(Earth-1010)?oldid=882555"
Community content is available under CC-BY-SA unless otherwise noted.