The Plumber Suit is a piece of secretive military equipment in Tony Slash: Omni-Adventures that was used by Tony Slash to fight aliens.

The Plumbers at the base in Trenton wear Clone Trooper-like uniforms. Each color on the suit resembles the troop's squad. Blue is Alpha, Yellow is Beta, Red is Charlie, and White is David. There is a special commando group called the Mandalorians.

The Plumber suit was an adaption of a Titanium Vibranium Alloy that was gonna be used for military tanks and other vehicles. The Phase II suit uses Durasteel as it's able to deflect more laser blasts and lightsaber attacks. The Mandalorian suit is made out of beskar iron, almost indestructible compared to Durasteel.

The Phase I Model is made from Titanium and Vibranium to where it's almost indestructible. The Leader version of each suit comes with a wrist communicator and an antenna. One specific suit comes with a pair of binoculars built onto the helmet. Another has a rangefinder built onto both it's phase I & II helmet.

Each suit is customisable and has a different purpose for each trooper or soldier.

The Mandalorian comes with a T-shaped Visor with comes with a built in targeting hud. This makes combat easier for troopers wearing the special armor.

Some technology lacks in the helmet's hud and there are multiple technical errors. Mostly system errors. This can trick the user into thinking that a friend is a foe or the opposite way around.

The Mandalorian Armor is made of metals that are very very heavy. Being extremely heavy slows down the user in the suit. This suit's HUD (Heads-up-display) is much more technological than Phase I's HUDs, which makes it more complicated for someone who prefers a simple HUD over the Mandalorian HUD. 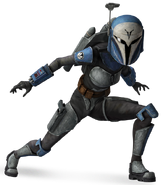 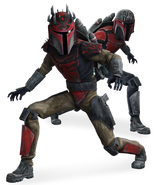 Mandalorian Squad Leader
Add an image to this gallery

Retrieved from "https://ben10fanfiction.fandom.com/wiki/Plumber_Suit_(Earth-71)?oldid=754978"
Community content is available under CC-BY-SA unless otherwise noted.