Start a Wiki
Planetesimal (pronounced plan-ee-tess-e-mole) is the Omnitrix's DNA sample of a Nebulan from the planet Nebulantis. It is an alien made specially for Mack 10, a series by Rob.

Planetesimal has a star-shape for his head, with seven planets and one moon surrounding his head. His hands are disconnected from his body but manipulate gravity and can still be controlled with sensors on the side of his body (similar to how Goop works). He wears a red belt, and under the belt are it's also rocky brown body with two toes. 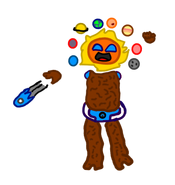 Planetesimal in Mack 10
Add an image to this gallery
Retrieved from "https://ben10fanfiction.fandom.com/wiki/Planetesimal?oldid=751653"
Community content is available under CC-BY-SA unless otherwise noted.