Pizza Guy is a Pizzasapian and is up for free usage.

Pizza Guy looks like a regular pizza with green eyes and an Omnitrix/Ultimatrix symbol. He is also slightly covered in peperoni.

Pizza Guy can control pizza and everything that makes it. He can also turn into different types of pizzas. And when attacked, Pizza Guy can regenerate. Pizza Guy can roll when he is in pizza mode and shoot sauses/cheeses. Also in each form of pizza, pizza guy gets different abilities such as fitting into small spaces as minipizzas or uses his slice pizza form as a boomerang. 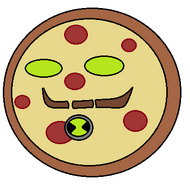 Pizza Guy vs Orange
Add an image to this gallery

Pizza Guy appears in The Random Wars as one of the contestants. He lost in his first battle to Orange in Pizza Guy vs. Orange, and will probably never appear again.

Retrieved from "https://ben10fanfiction.fandom.com/wiki/Pizza_Guy?oldid=866151"
Community content is available under CC-BY-SA unless otherwise noted.