Ben 10 Fan Fiction Wiki
Register
Don't have an account?
Sign In
Advertisement
in: Characters, Simien 10, Villains in Simien 10,
and 7 more

Phobius Miedo is a minor antagonist in Simien 10 and Simien 10: Blood Monkey.

Phobius Miedo is a humanoid being made out of black mist. He has no feet and regularly floats above the ground. His head is oddly shaped and long.

In Blood Monkey, Phobius wears a dark blue suit with a blue tie underneath, along with darker pants. He wears his Hexatrix on his left hand, which is concealed into his suit although he can dial an alien at any time using the symbol.

Phobius is a smart alec fast talker who generally acts in his own self interest. He is prone to theatrics or practical jokes with his hologram generation and telepathy, both of which usually border on sadism.

Often referred to as a coward by his sister, Phobius usually searches for an easy way out of problems and will run away if the situation becomes to hard to deal with, leaving his friends behind.

As his Hexatrix is based mostly on psychological aliens, Phobius will generally use trickery and manipulation in his fights, relying less on his brawn.

Phobius can create holograms by generating blue dust which can be shaped into any form he wants, including very complex ones. These holograms are purely appearances only as any object will simply pass through them. These holograms can follow the laws of physics, despite their intangibility, and can also emit realistic sounds.

Phobius can read the minds of any living being. His telepathy is unbound as he can read a targets subconscious or greatest fear.

Phobius can combine both of his abilities in order to create holograms of his target's greatest fears, allowing him to manipulate his enemies.

Phobius also has photographic memory, allowing him to full recreate his previous experiences in holograms.

Phobius's holograms are fully intangible and cannot be used in any other way than sensory manipulation.

Due to his hologram's intangibility, there are many different ways to check whether or not an object is a hologram.

Phobius' mind reading can be blocked by certain species or devices. 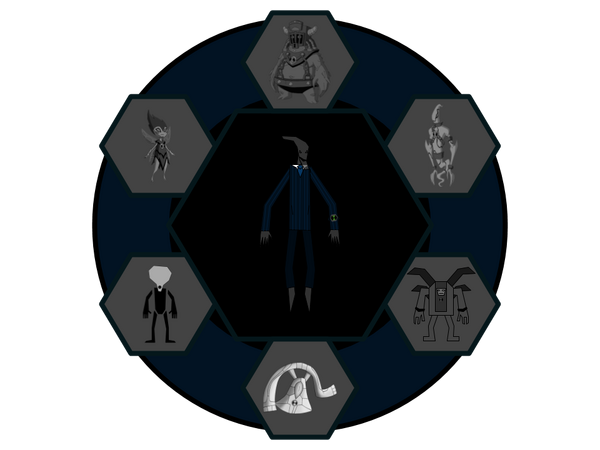 Phobius's Alien Hex. All of Phobius' aliens are in black and white, unlike other Hexes, despite them being normally colored once used.
Community content is available under CC-BY-SA unless otherwise noted.
Advertisement