Pearl Leonis is a main protagonist in Imad 10. She was first introduced as the mysterious evolved female Psychysapien in the Imad 10 Chapter "Jeopardized Existence", though it wasn't until Chapter 5 "Total Chaos" that her true identity was revealed. She is a Psychysapien, Masquerade's species.

Her first name "Pearl" (the jewel of the seas) relates to her royal blue skin (color associated with the ocean) and her "precious" (loving and tender) nature.

Her last name "Leonis" refers to the Constellation of the Lion / Lion Horoscope in the Western Zodiac.

General: Pearl is a head scientist of Cerebrax VII, meaning that in addition to Psychysapiens’ naturally high I.Q., she's a genius even among her people. While she specializes in chemistry, she’s still quite adept in a plethora of scientific fields, being able to jury-rig advanced machinery out of scrap in a record time. She displays a caring and kind attitude towards most, especially her close loved ones. A good example was risking her life to save a child from berserk aliens rather than hiding. When in peril, she's willing to courageously look fear in the eye and risk her life for her loved ones’ sake with little hesitation, a noble trait Imad learned from her as time went by. The two steadily developed reciprocal, solid romantic feelings for each other during their adventures, each becoming willing to put their life in danger, even believing they might not make it alive, to save the other.

Flaws: Because she was constantly harassed / bullied as a child, and avoided by her coevals in her teen years, Pearl suffered of timidity, social awkwardness and isolation, talking to people only when important and only saying the necessary. At one time, her closest friends consisted purely of her blood relatives, her older brother Onex and younger cousin Ruby. Despite their attempts at helping their loved one come out of her shell, Pearl remained insecure about herself, fearful subconsciously of hurting her loved ones and ending up all alone - though she started gradually opening up to the world after going on intergalactic adventures with Imad. She can be unfairly judgmental: upon first meeting Ben Tennyson, she was annoyed by his carefree attitude at a time of crisis, thus took him for a hero wannabe. She nevertheless admitted her mistake in the end, acknowledging him as a true hero. Another example: after realizing her and Imad’s minds were tuned, she subconsciously placed the boy to high regards, expecting him to be fully understanding of her emotions and opinions, only to be shocked and put off when he displayed harsh and seemingly cruel actions.

Powers: In her original form, Pearl had all-around balanced telekinetic powers, and was quite adept and versatile at using said powers in combination with her surroundings for self-defense. After the massive attack on her planet in Chapter 5, she learned Pluribellator Martial arts to avoid being defenseless should a similar situation arise again. She thus became an agile, nimble foe not to be underestimated in physical combat; at occasions, she employed an experimental Proto-Armor + Proto-Tool, or a portable Battle Mecha quit efficiently. But she proved the most useful outside the battlefield, using her enhanced intellect and varied scientific knowledge to the advantage of the heroes.
Upon her transformation, she acquired all the powers of Ultimate Masquerade. However, she required learning how to properly channeling her powers over the course of many centuries, not to mention that she started with a power level much lower than Necros'.

Personal: Pearl's favorite color is Turquoise. /  She's very curious about her surroundings, be it technological or natural; she's very interested in learning how things work. / She's enthusiastic about ecology, loves observing nature and taking strolls through it, especially the quiet parts to escape the stress of her work in the city. / She has a thing for learning about mythology and folk tales. / She considers her cousin Ruby Leonis as the little sister she never had.

Her Astral Form is described as "The sacred light that can illuminate the farthest and darkest reaches of existence", referring to her ability to sympathize with almost anyone and bring them out of despair and sadness through "positive emotions".

Pearl is a royal blue humanoid alien. Like all Psychysapiens, her body is covered with a unique pattern of twinkling star-like spots, and her upper face sports an organic mask (hers is dark blue) with a “gemstone” colored like their eyes (hers are emerald green). Like most females of her kind, "hair tendrils" with a different color shade than her (dark blue in her case) flow down from her head; Imad described them as "a waterfall at nighttime".

At one point, Pearl was forcefully evolved into her Ultimate Form by Necros to become his queen. Her clothes were consumed by the energy, her body turned silvery her “stars” glowed much brighter, and her organic mask’s figure changed, now covering half her face with two protuberances and sporting a trident shape on top. However, she still retained her Emerald Green eyes (which were the first features Imad recognized upon seeing her in her then new Ultimate Form) and bead.

As a child, Pearl was constantly harassed by kids envious of her sharp intellect, leading her to become a shy social recluse. At one point, the bullies humiliated her in front of her classmates by snatching her diary and reading it out-loud, before beating her and thrashing her belongings, including an A.I. toy which was the closest thing she had to a friend. In a fit of rage, she told her older brother Onex to "make those bastards pay", resulting in him giving them all a near fatal beating. Once her rage cleared, Pearl regret this turn of events, deeming this a disproportionate retribution for her tormentors, thinking most were only kids who didn't know any better, and feeling pity when she saw them in their hospital beds; adding salt to the wounds, her brother was sent to jail for his vigilante act.

Vowing not to let her emotions get the best of her again and to take responsibility for her actions, she convinced the school principal and police officers that she was to blame for seeking vengeance, not Onex. As a compromise, both Onex and her did community service for a while and ended up absolved. However, most of Pearl's classmates started avoiding her, fearing her brother's wrath should they disrespect her in the slightest even unintentionally, no matter how much Pearl and Onex showed they both changed for the better. Despite it persisting in her teen and adult years, Pearl always felt others weren't truly to blame, deeming her solitude as the cost for a life lesson. Coupled with her insecurities, her reputation made it hard for her to bond with others. Romantically, Psychysapiens who showed interest in her either felt intimidated by her intellect, or wanted to selfishly take advantage of her generosity and skills.

Pearl made a 1st stealth appearance in Imad 10 Ch. 3 "Jeopardized Existence": She was the mysterious evolved Psychysapien who saved Imad with her reality warping powers. Back then, she merely revealed she was close friends with Imad in her world. She was properly introduced in her normal form in Chapter 5: Total Chaos, trapped in a burning inferno from which Imad saves her before escaping alongside her and Ben Tennyson from Cerebrax VII aboard her spaceship; while bonding with the 2 ATD wielders, she discovered that her and Imad's Minds are tuned, allowing thoughts to travel with ease / on their own between both. She was of great help by informing the heroes of the Magical Psychic Stone of Rozumite XI, constructing anti-mind control devices, piloting her ship with skill great enough to send her pursuers in a black hole, helping with constructing the Psychytrix and being the fifth voice inside Ben's Alien X when she and Imad entered his mind as a tie breaker. At the end of Total Chaos, she sees Imad as a good friend "unlike others she met".

In "Escaped Identity", she was turned into an evolved Psychysapien by Necros to become his queen. When the crisis ended, seeing she reciprocated Imad's love for her, she proposed he stays at her side on Cerebrax VII in Ultimate Masquerade's form, as to share the same lifespan. Imad told her that despite his love for her, he'd miss his friends on Earth, but assured her to reconsider this offer someday before leaving the planet on good terms with her. After emerging victorious against his evil alternate self, Imad reminded Pearl of her offer before proposing to her in Ultimate Masquerade's form. She agreed and made out with him in his human form, a symbol of accepting each other's differences. They were wed and had 2 children, Jennifer and Daniel; the later would become evil because of her husband's meddling with time to prevent him from getting hurt and in a coma. However thanks to Kronin, Imad fixed his mistakes, and Danny woke up from his coma. 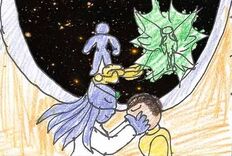 The Vision Pearl shares with Imad due to their special bond 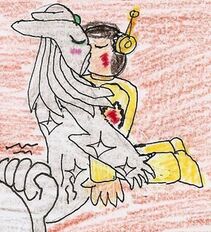 Imad finally confessing his feelings to Pearl through a little gesture 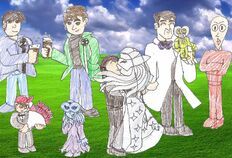 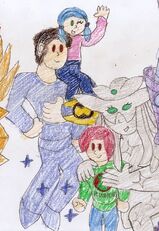 Early drawing of the character.
Add an image to this gallery
Retrieved from "https://ben10fanfiction.fandom.com/wiki/Pearl_Leonis_(Imad_10)?oldid=811903"
Community content is available under CC-BY-SA unless otherwise noted.