Paradox Wasp is quite simply a Time Paradox given a physical form. He was created upon Rex traveling through the multiverse too often and ended up coming in contact with a future echo of himself. The Deltamatrix scrambled the doppelganger's DNA accidentally due to chronoton interference. Paradox Wasp was created as an amalgamation of various DNA mixed with Rex's as well as the chronoton particles. 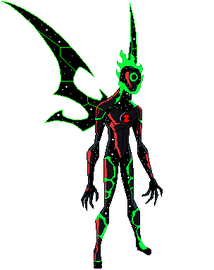 Paradox Wasp (Without Portals)
Add an image to this gallery
Retrieved from "https://ben10fanfiction.fandom.com/wiki/Paradox_Wasp?oldid=806060"
Community content is available under CC-BY-SA unless otherwise noted.