Paperthin is the Antitrix's DNA sample of a mutant Thep Khufan from the planet Anur Khufos in Ben 10: Missing Pieces.

Paperthin looks like Snare-oh in Ultimate Alien, but the gold parts are silver and his bandages are white. His bandages look messier overall and there are more gaps in between them. His headdress somewhat resembles a beak, similar to the Cyclone Mummies from Protector of Earth. The Antitrix symbol is on his chest.

Being composed of bandages, Paperthin can reshape his body at will. This allows him to split himself apart to dodge attacks and reform to counter-attack. He can also generate more bandages for various needs. Additionally, his body is completely hollow, making him extremely flexible. He is more flexible than Snare-oh.

Paperthin can regenerate himself and recover from many types of injuries, including being torn into confetti by a large fan, almost instantly.

Paperthin can extend his bandages, from his fingers or from his body, creating a sturdy wall. He can also sever the bandages he extends.

Although Paperthin is frail, he has some degree of enhanced strength, allowing him to lift and throw objects and other beings with his stretchable limbs.

Despite being made of bandages, Paperthin is immune to the effects of water. As such, he can breathe underwater.

Paperthin has a surprising amount of speed and agility for his size and bandages, even enough to scale walls and dodge attacks with relative ease.

By reducing himself down to single bandages, Paperthin can slip through extremely tight spaces or small openings. This allows him to escape various traps or maneuver through cramped areas.

Paperthin can break his body apart to create a pile of bandages to cushion a landing.

Like all Anur System aliens, Paperthin is immune to the effects of Corrodium and can see in the dark.

Paperthin can block out Corrodium radiation with his bandages, allowing him to carry the dangerous crystal inside his body without irradiating anything nearby.

Paperthin can survive in the vacuum of space thanks to his composition.

Although he has never trained himself to do so, Paperthin can perform magic similar to Egyptian curses.

When extending his limbs or other parts of his body, Paperthin becomes susceptible to strong winds and suction forces.

Paperthin's increased flexibility compared to Snare-oh comes at the cost of having less durable bandages.

Paperthin can be frozen solid by liquid nitrogen.

Paperthin can be tangled up in his own bandages. 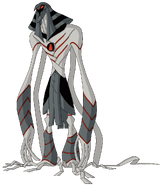