The Panuncian are the Predator of the Splixsons' (Ditto's Species) and lives on Hathor.

They look like a mix of a wolf and a hyena, with large saber-teeth and a horn on its dog-like nose. Their stomach hair is a crimson red while their back hair is black.

Unknown. But, it is known that they live on Hathor

They usually prey on native inhabitants of Hathor.

As its prey is Splixsons, this predator can multiply itself to catch up with them.

Too much water blasted into it's mouth will cause it to bloat and be rendered immobile. 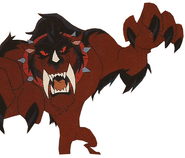 Add an image to this gallery
Retrieved from "https://ben10fanfiction.fandom.com/wiki/Panuncian_(Species)?oldid=916187"
Community content is available under CC-BY-SA unless otherwise noted.