Ben 10 Fan Fiction Wiki
Register
Don't have an account?
Sign In
Advertisement
in: UltiVerse, Aliens, Ben 10: Protector of the Omniverse,
and 16 more

Overflow is the Infinimatrix's DNA sample of a Cascan from the planet Cascareau in the Andromeda Galaxy in Ben 10: Protector of the Omniverse. He is the Timeline 1 equivalent of the canon Overflow.

Overflow has his reboot appearance, but the silver parts on his armor have a metallic sheen and he is more upright. The Infinimatrix symbol is colored black and green. His colors match the color palette of Heroes United.

As the transformation track begins playing, Ben hovers in a dark green background with light green bubbles pulsating rapidly behind him.

Overflow has enhanced durability thanks to an armored exoskeleton that protects his body from damage. He can also withstand strong water pressure.

Overflow has a degree of enhanced strength.

Overflow can launch pressurized water blasts from the tanks on his forearms. He can use these to propel himself by spraying water downwards.

Overflow can create weapons out of his water, such as blades and whips.

Overflow can spit water out of his respirator.

Overflow is able to breathe underwater and swim at high speeds. He also has amazing agility and great endurance.

Overflow can manipulate water into different states of matter.

Overflow has a small degree of cryokinesis, as he can create structures made of ice.

If Overflow shoots water at an electric device, he can be shocked while shooting, since water conducts electricity.

Overflow can be harmed by magic.

Overflow can accidentally cause a flood in confined spaces if he releases too much water. 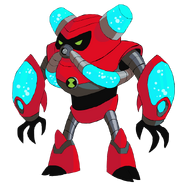