Overbite is the Negativitrix's DNA sample of a Millganite from the planet Anur Millgan in an Earth-1010 timeline where the Anurians of Millgan were never wiped out by the Vladats.

Overbite is a humanoid shark wearing dark-blue plated armour on his face, upper-arms, and upper-legs. His skin varies from being pale blue and dark purple, and he has eight fins covering his body: Two per arm, one on each leg, one on the upper back, and a large tail fin.

Overbite is a close-combat alien with elastic physiology, capable of stretching out his various extremities quickly and effectively to fight and reach beyond his normal range. He has incredibly powerful jaws that he is capable of unhinging.

Overbite is comparatively weak and slow without eating, and his boosts do not last very long.

Overbite was first used in Time Trials. He killed Time Breaker Vilgax, but allowed Ben to defeat him with MindMatter. Albedo used him in The Only Good Necroterran to demonstrate a timeline where the Millganites were never wiped out to a crowd of Anur G'rrnay natives.

Overbite's DNA was used in the Techtrixes created by the Blacksmith in Life On Earth. Albedo tricked one of them Techtrix users- then transformed into a Millganite form- into defeating one of its allies before defeating and accidentally killing it by using Intersect to destroy its Techtrix. 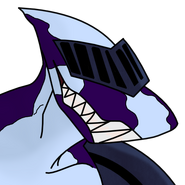