Otto Maton is a Spaciosapien from the Off-the-ground and the mascot of Pokémon Sky.

He is predominantly made of cubes. His head has square with black sclera. His pupils are blue. His torso has a blue 98 on it. His legs are made of rectangular prisms. He has an antenna with a blue LED light on it.

Otto was an ordinary Spaciosapien wrongly punished for a crime he didn't commit. He was disassembled and his parts were sent through space to either become space junk or Plachaküle spare parts. Luckily, they crash landed on the Off-the-ground in front of a young Violet who went home and rebuilt Otto like a jigsaw puzzle. Thankful for her help and eager to forget those guys at the Perplexahedron, he granted her his eternal servitude. He then, years later, ditched her for her child, Derwin.

Otto is kind of a big jerk. He does whatever he wants and doesn’t afraid of anything, but this often blows up in his face in the form of physical comedy. He has standards though, and doesn't go after unacceptable targets. He is asexual and aromantic. He has a sort of Pokémon and Trainer bond with Derwin, though which fills which role is still being figured out.

He has powers like Charles Zenith without budgetary constraints. He can manipulate space as easy as a Chronosapien manipulates time. He is as strong as a metaphor.

His move set is Metronome, which randomly picks from just about any move, Spacial Rend, which rends space around a target and is likely to get a critical hit, Gyro Ball, which has him spin at the opponent, and Wood Hammer, which has him smash his opponents with a hammer but also take some damage himself.

He is easily repaired.

His Ability is Trace, which copies the opponent’s Ability. If the opponent has no Ability, or an Ability too hard to copy (i.e. Multitype, Gulp Missile), it will fail.

He is very much overconifident.

He is prone to slapstick, meaning he gets hurt a lot. This is also why Wood Hammer gives him recoil.

His head is not well attached.

He requires matter to manipulate. Antimatter cannot be used, as it will explode.

He is quite small, about 3 feet tall.

Otto as Timekiller, with Derwin as a Time Breaker for Halloween. 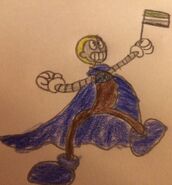 A scrapped concept for "Otto Maton 2.0", meant to be similar to Mettaton EX. 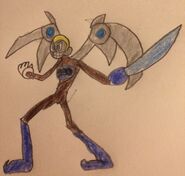 A scrapped concept for "Otto Maton SOUL OS", meant to be similar to Mettaton NEO.