The Ornithis are Analyzard's species. They originate from the planet Al Hazen, and also populate Chemicon X.

Ornithis are a race of humanoid reptiles with brown skin. They have three yellow eyes with red slit pupils. They have sharp shoulder plates.

The three eyes of an Ornithis allow them to observe things in 3D, where as Human eyes only build images in 2D but with depth. This makes them incredibly skilled at determining the properties of a given object or environment using eyesight alone.

The Ornithis are a race of brilliant scientists, a title they have held for twelve thousand years. For a long time they rivalled the Galvan in technological prowess, even creating power sources more powerful and effective than the Galvan were capable of matching.

Thousands of years ago, the Ornithis colonised the planet Chemicon X. Since the planet was lifeless then, they used it to create a single massive power plant. Short of a Dyson sphere, Chemicon X was the most impressive power source the galaxy had ever seen. However, the planet became almost obsolete upon the discovery of sub energy. Since then they have kept the planet operational as a life reserve for the now-native Sentient Chemicoal races and reserve their scientific experiments to other lifeless planets in the Chemicon system.

Some Ornithis operate a famous Travel Advisory that works to help individuals travel to other planets safely and ensure that they do not visit worlds inherently dangerous to them.

Ornithis possess incredible analysis abilities, and are able to tell the properties of almost any entity from sight alone. This makes them incredibly useful for, say, identifying the purpose of a device or learning the powers of an alien.

They have enhanced intelligence. Although they are no match for races like Galvan or Cerebrocrustaceans, they still put races like Humans and Tetramands to shame.

Ornithis are somewhat light and agile, making them skilled at climbing things to a degree better than a standard human.

They are very dexterous with their hands.

Ornithis are unable to properly analyse extra-dimensional entities or reality warpers such as Naljian or the Contamelia. They also struggle to analyse entities from other areas of the multiverse to their own.

There are some things, albeit few in number, that comes from this reality that Ornithis cannot identify. Some objects that qualify are pieces of technology above level 17, although not all of them, as their inner workings are usually too complicated to guess at a glance. 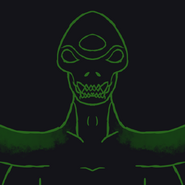