Opticoid (play on optic) is a race from a planet called Sightra (play on sight).

Opticoids are tan-colored reptilian/Humanoid creatures. They have at least 17 eyes (none of which are on the face, ironically) scattered across their muscular upper body. Their face consists of only a mouth and 2 pink, bat-like ears that dominate most of their head. Their legs are thin and slightly bulky, and they have 4 fingers and 3 toes.

Opticoids can scale on walls with ease. With their 360 Degree vision, they can evade enemies. Their most known ability is to fire energy from their eyes. They can merge their eyes into a powerful one and have alternate types of energy such as freezing or just normal energy blast. The most powerful blast is when the chest eye gouges out and fires. 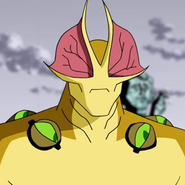 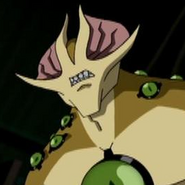 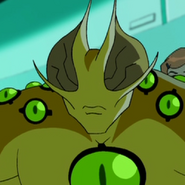 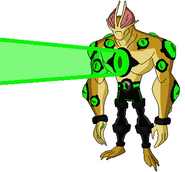 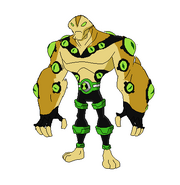 Matured Eye Guy
Add an image to this gallery
Retrieved from "https://ben10fanfiction.fandom.com/wiki/Opticoid?oldid=883955"
Community content is available under CC-BY-SA unless otherwise noted.