Ophidians are Snakepit's species in some timelines and continuities. They live on the forest planet Serpentis.

Ophidians are not from any specific series, and are free to be included in your series. Be sure to add the names of any notable individuals into the 'Known Ophidians' section of this page.

Ophidians are a race of four-armed humanoid snakes. They have long, winding bodies and extended necks. Their heads are identical to the heads of Earth snakes. Their skin colour varies, but all Ophidians have cream-coloured scale segments on the underside of their tail, stomach, and over the biceps on each arm. Each arm ends in a hand with only two fingers per hand.

Ophidian's are powerful constrictors. When they wrap themselves around their prey, few are powerful enough to break free. The crushing powers of an Ophidian is enough to crush several steel beams at once.

An Ophidian's skin colour varies with where it was born, giving it specialised camouflage for that location.

Ophidians can generate venom in the sharp claws on their hands.

Ophidian's are weaker fighters than most other species and can easily be over powered, especially if caught off guard.

Ophidians have an instinctive fear of fire. This fear often overpowers any kind of rational thought.

Having only two fingers per hand makes grasping small objects or fine manipulation diffuclt without using at least two hands.

The Omnitrix's DNA sample of an Ophidian is always purple-skinned, meaning that it's camouflage abilities are more likely than not nullified.

The name Ophidian is based off of the 'clade' that snakes fall into, Ophidia. 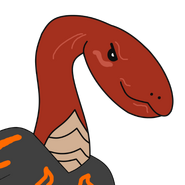