Start a Wiki
This Omnitrix is used in the series, Brandon 10.

In The Original Series, the Omnitrix resembles a watch-shaped device with an hourglass faceplate and four tubes coming from it and circling around the device itself. Green DNA samples stream through the tubes and are visible from the exterior design. There is also a green button on the side of the shell that activates the Omnitrix. The outer shell is black, the tubes are white/transparent, the faceplate is black and white but changes colors when used in different functions as seen below. When activated, the Omnitrix's faceplate is pushed up and shaped into multiple black silhouettes of the many alien forms.﻿

The Omnitrix is used as a device to transform its user into different species of alien. It can scan them and keep the DNA within; ready for transformation use. It can also act as a communication device from Mechanic Badges and Incoming transitions as well as a navigation system. It can also repair broken DNA as seen in Mystery Man and The Battle For Earth Part 2. On rare occasions, the Omnitrix can be used as a power source for Technology as seen in Blast to the Past. 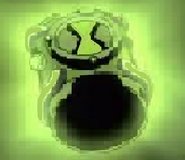 Omnitrix in the Original Series

The Omnitrix in The Shorts

The Omnitrix as seen on a Brandon 10 DVD

Omnitrix Overload in Conquest of the Conqueror Part 1

Astro Hologram on the Omnitrix in Aliens Among Us
Add an image to this gallery
Retrieved from "https://ben10fanfiction.fandom.com/wiki/Omnitrix_(Brandon_10)?oldid=859046"
Community content is available under CC-BY-SA unless otherwise noted.