Omni Park is an upcoming movie directed by Steven Darkberg that will air at an unkown date.

The story is very simmilar to Steven Speilberg's blockbuster hit, Jurassic Park , except the intro, but with Ben 10 concepts and BTFF users. Actually, ignore having the scenes word for word. The creator sits on a throne of lies. Some of the original actors have been replaced to give it a more "modern" feel. Non-sapient aliens in this movie are called "dinosaurs" instead of "aliens". 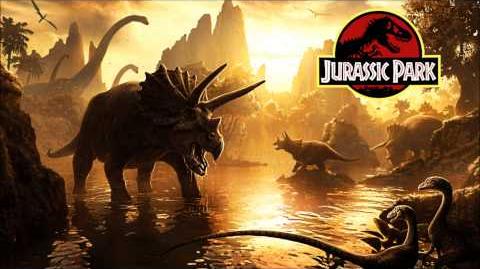 During the first second, the movie's logo slowly appears, and then at the five second mark, it fades away. At seven seconds, "Directed by Steven Darkberg" appears, and then fades away three seconds later. Then, at twelve seconds, "Written by David Darkepp and Michael Darkton" appears, and then fades away, yet again, three seconds later. At eighteen seconds, it says "Thank you to all of BTFF for joining this project." At twenty-two seconds, both the credits and blackbackrougnd are gone, replaced by a black helicopter flyingtowards the island. The man who steps out after it lands near a cliff, John Darkmond, examines the dinosaurs that are on his newly made proper. At the fifty-five second mark of the theme, the man starts talking to his employees that also exit the helicopter.

John Darkmond: Some might say that this idea was more insane than Batman villains. But to me, they don't want to accept change. Wouldn't you agree?

Employee #2: Sir! The guest you have invited are arriving!

At a minute, thirty-five seconds, a helicopter lands near a welcome center.

John Darkmond: Excellent! Inform Brandon of our VIPs needing the best introduction we can dish out, for this is the one and only Omni Park!

The theme ends at the one minute, fifty-seven seconds mark.

John Darkmond enters the visitor center's restricted acess area, which is the Park's DNA lab, where he meets the guests Ian Lego, the paleontologist, Ellie Speedster, the paleobotanist, Tim Dragon and Lex Speedington, his grandchildren, Alan Sci, the archeologist and Donald Sif, a lawyer sent to inspect the park. Brandon Wu, cheif paleogenetics scientist, is also there.

Donald Sif: What hospitality. You keep us waiting on a helicopter for a hour and a half, keep us in here for two more, and there's no free food. What's next, almighty millionare?

John Darkmond: Other than the now-ignored Donald, does anyone else have comments?

Ian Lego: Yes, I do. How did you get the dinosaurs on this island anyways.

Brandon: Allow me to explain that. We have a team of archeologists, which sadly doesn't have Alan in it, to find a mosquito fossilized in amber. Then at this lab, we carefully extract the blood that the mosquito drank. Finally, through a cloning process, poof. Dinosaur.

John Darkmond: Through this, we even have our own Tyrannopede.

The room goes quite for a moment.

Alan Sci: Can you repeat that? I'm not sure if I heard that correctly.

John Darkmond: We have a Tyrannopede. Come on, I'll show you the less dangerous ones in the jeep ride.

After the guests and John get into a jeep and drive off, they end up in a secluded jungle-like area. The jeep stops, and Alan gets up and takes off his sunglases in shock and awe.

Ellie Speedster: What are we supposed to be looking at? I don't see any-

Alan turns her head to the left, and she gets up too. They see a herd of migrating Ziboson. Alan and Elllie then get out.

Ian Lego: He did it. The crazy old man. He did it.

John then exits the jeep and walks up behind Alan and Ellie.

John Darkmond: Well, what did I tell you? With this in mind, I finally can say this oficially. Welcome, to Omni Park!

Donald Sif: All of the money this place is gonna rake in. We're gonna be rich.

Alan Sci: John, tell me. How fast are those things, anyways?

John Darkmond: I don't know. If the Tyrannopede can go thirty-two miles, then the Zibosons will be no exception in the speed world.

Alan Sci:  Let's get out of here before I puke rainbows or something. If reincarnation is truly possible in science, then anything else might be. Like bald men with blank faces wearing suits teleporting in a dark forest, or Rick Astley making a joke that becomes world renowned with one of his songs.

John then takes out a phone and dials the number of Dennis Charbel, head of security and technology at the park.

Dennis Charbel: On it. Did Donald call in Bruce yet?

John Darkmond: Surprisingly, no. I'm still going to keep my gaurd up, though. I don't want any of the dinosaurs at risk because of those two.

After everyone gets back into the jeep, they head towards and stops infront of a giant concrete barrier with electric fences that houses the vicious king of the dinosaurs, the Tyrannopede.

Tim Dragon: Sweet! I gotta take a picture of that thing!

Lex Speedington: Tim, don't be such an idiot. Do you seriously grandpa would allow you to do this?

Tim Dragon: You seriously believe him when he syas these things are real? The Chuck E. Cheese animatronics look more real than these.

Tim then gets out of the jeep, which then gets John's attention.

John Darkmond: Tim, what are you doing? Tim, stop! TIM!

Despite all of John's attempts to get his attention, Tim proceedes to climb the fence, get electrocuted, and fall to the ground.

John Darkmond: Lex. What made him do this?

Lex Speedington: He...he wanted to take a picture of it.

Ian Lego: That grandson of yours is insane. We might need paramedics.

John Darkmond: No, we don't. The fences were elctrically charged, but didn't have enough volts to kill him. He's just going to be unconsious for a while.

Out of nowhere, John gets a phone call.

Dennis Charbel: I got bad good news. The good is that the Tyrannopede didn't get the scent of Tim when he was near the gate. The bad news is that the electric grid is off. Also, Bruce's jet is on the way.

John Darkmond: Stall him so that we have time to come back send another jeep, too.

When the conversation is over, a second jeep is sent for John, Ian, Ellie and Donald, but the goes towards an outhouse. Alan stays with Lex and Tim. Then, it starts to rain when rumbling is heard. Alan looks at a puddle.

Lex Speedington: What is it?

Once the Tyrannopede is done approching the jeep, it starts to examine it. It then almost flips over the jeep, causing Lex to scream. The Tyrannopede then breaks open the glass roof with a headbutt, causing Lex to scream even more. However, with one more attempt, the Tyrannopede finally flips over the jeep. As Lex, Tim who just woke up and Alan escape through the back, Alan takes out a flare and attempts to distract the Tyrannopede to give Lex and Tim some time to escape. Alan then throws the flare into an outhouse which Donald was almost about to enter into. Once the Tyrannopede gets close, it knocks him down once and for all in one swipe. It the proceedes to walk off. The movie then cuts to John, Ian and Ellie at the visitor center where they see John Ultra holding off Bruce Cartoon from entering.

Bruce Cartoon: Listen, I have strict orders from Donald Sif to enter here and exterminate any and all Havok Beasts here. He said they were a threat.

John Ultra: And I have strict orders from to not let you do that.

Bruce Cartoon: On who's authority?

Retrieved from "https://ben10fanfiction.fandom.com/wiki/Omni_Park?oldid=508034"
Community content is available under CC-BY-SA unless otherwise noted.