Inside the the Omnitrix is a giant egg also known as the "Spore." The Spore accesses the DNA from the codon stream and creates fusion aliens that then freely roam around inside of the Omnitrix. Not all of the alien fusions created are good though. The characters also often reenter the Spore to become a brand new fusion.

A fusion of Goop, Overflow, Echo Echo and Swift. He looks like Swift but is green, transparent and has a larger chest with Overflow's stripes over his body. On his arms and legs he has features of Echo Echo and the inside of his mouth and throat looks the same. In Chilling With Heroes he became a To'kustar/Nanochip hybrid and remained like that until the end of the next episode, Way Bigger.

Ult. Echo Echo's head, AmpFibian's tentacle on his back, Swampfire "seeds" on his body, Echo Echo's "cassete" thingy on his feet, Chromastone's body and Crystal all over his body, Cannonman's color on his hands, Big Chill's wings, and Hyper Pack's backpack. His Big Chill wings sprout from beneath the Backpack. In Chilling With Heroes he became a To'kustar/Nanochip hybrid and remained like that until the end of the next episode, Way Bigger.

Croxyrus is a fusion of Airbug and Icescream. He has a white humanoid body with four eyes and a shell on his back. The shell opens up into wings. He also has four arms. In Chilling With Heroes he became a To'kustar/Nanochip hybrid and remained like that until the end of the next episode, Way Bigger.

Dos begins as the most popular guy at school. He is a fusion of Lodestar, Clockwork, Eon and Ultimate Echo Echo. A fusion of Upgrade, Wildvine, Osmosian and Ditto. He appears as a regular Human with Wildvine's tentacles for feet, the tentacles have Upgrade's patterns. One of his arms are permanently stuck as a metal spiked ball. He has four spikes on his forehead. His entire body is covered in Upgrade's patterns apart from his stomach region which is white and his metal arm isn't covered either. His chest has Jetray's crest and he even has Jetray's tail. Dos is a pesimistic emo. He is quite dorky but a ferocious fighter. Dos continuously changes from good to evil, as he just wants to be on the winning side.

Ancy is a fusion of Goop and ChamAlien. He appears as a regular Merlinisapien but has a Polymorph's colours and the Omnitrix has given him an Artificial Gravity Projector (UFO) even inside of it. Ancy is very smart but a little crazy which causes him to create various crazy things. At some stage Ancy turns crazy and goes evil. In Chilling With Heroes he became a To'kustar/Nanochip hybrid and remained like that until the end of the next episode, Way Bigger.

Dan is one of the most oddest fusions by the Spore. He is a fusion of an alien and it's very own Ultimate Form. Dan looks like Ultimate Cannonbolt but with regular Cannonbolt's colours. Because he is an Arburian Pelarota he is just plain awesome. During the season 1 finale, he gets stuck inside the Spore and turns evil. In Chilling With Heroes he became a To'kustar/Nanochip hybrid and remained like that until the end of the next episode, Way Bigger.

Plasma has a very long name, but even he forgot it so he just calls himself by the last word in his name, Plasma. He is a fusion of Wildvine, Ultimate Echo Echo, Rollerboaster, ABC, Boywen and Ultimate Humungousaur. He has Ultimate Humongousaur's body structure with Ultimate Echo Echo's colouring and has his sonic disks on his shoulders. Plasma also has ABC's wings, Rollerboaster's fin and fingers and Boywen's head with Wildvine's colouring. Plasma always manages to get onto the topic of combining his powers, he then always tries to demonstrate by combining his powers and failing hardcore.

Tohunga is a very mischievous and powerful fusion of Ghostfreak and Fourarms. He has Fourarms' body with Ghostfreak's skin. Tohunga is very sarcastic and has an odd love of deceiving people. He also hates Frozen Yogurt. In Chilling With Heroes he became a To'kustar/Nanochip hybrid and remained like that until the end of the next episode, Way Bigger.

Redo is the second character to have 3 different fusions and is the first character to have all 3 different forms seen. He appears in the series as a villainous fusion of Upchuck and Cannonbolt. He looks like regular Cannonbolt with Upchuck's colours and bulbs on his neck. His second fusion is a Wildvine Grey Matter fusion, he has Wildvine's regular body structure with head, size, clothes and brains. When he becomes his second fusion he turns good and turns into a third fusion offscreen, a Cannonbolt Diamondhead Grey Matter fusion. He has Grey Matter's body with Cannonbolt's bulbs around him that allow for him to roll up. He then has Diamondhead's colours and arms. In Chilling With Heroes he became a To'kustar/Nanochip hybrid and remained like that until the end of the next episode, Way Bigger.

Solo is a quarter of Upgrade, Ultimate Echo Echo, Ditto and Heatblast. He looks just like Upgrade but with Ultimate Echo Echo's sonic disks over his legs and hands. He has Heatblast's flame over his head and Ditto's bulbs on his shoulders. He is very arrogant, cocky and hot-headed.

A fusion of Ultimate; Echo Echo, Humongousaur, Spidermonkey and big Chill. He is also a fusion of Ek, Paperboy, LMN and Lodestar. He has Ultimate Humongousaur's right hand, Ultimate Echo Echo's legs, Ultimate Spidermonkey's spider legs, Ultimate Big Chill's mouth, Ek's torso, Paperboy's head and face but not his mouth, LMN's mouth too and Lodestar's left hand. He is stealthier than a ninja and always carries small books with him. Whenever he is bored he practices his ninja skills or reads a book.

(Sub) Blackstone is a fusion of Diamondhead and Chromastone. He looks exactly like a fusion of the two aliens because his body is overall purple body color with several lines and dots, and making him an alien made of crystals and diamonds that are the color light blue. He has shards on his arms, chest, back, and one on his head resembling a horn (just like Chromastone), with also some diamonds on his knees. Unlike both Diamondhead and Chromastone, Blackstone doesn't have a mouth. Blackstone is good hearted, a great fighter, cares about his allies, decides not to kill anyone (even when enraged), and he has a thrill for battle, meaning he likes to fight strong opponets. Blackstone also carries both of Diamondhead's and Chromastone's powers which include enhanced durability, ultraviolet positive energy projection, energy absorption, regeneration, flight, amazing strength, making powerful forcefields, crystal generation, energy refraction and redirection, crystal shard projectiles, explosive crystals, crystal weapon manifestation, can sense anyones energy, strong will power (which is a power that neither Chromastone or Diamondhead have), and self destructing (which is actually his weakness).

Charbel is a fusion of Heatblast, Lodestar, Chromastone, Upgrade, XLR8, Clockwork, Eatle, Humongousaur, Fourarms, Fasttrack, Rath, Armodrillo and Big Chill. He is abnormally strong and virtually indestructible. He is smarter than a super computer and very mischievous. Charbel is also reeeeaaally overpowered, but there are reaaaaalllyyyy overpowered villains so that is okay :D

More Characters to be added... Note: the only Ultimate Forms are the 6 that escaped because they are the only ones with DNA. You can also always change your DNA by reentering the Spore. YOU MUST FIND YOUR OWN WAY TO MAKE YOUR PICTURE!!!! You can go to Thomas Perkins' dA account to find the fusions that he made like Greybolt (Grey Matter and Cannonbolt) 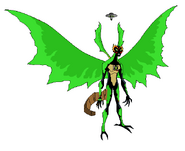 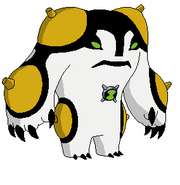 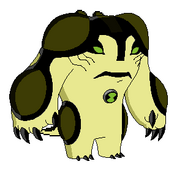 Blackstone (Credits to HIIVolt on deviantART) 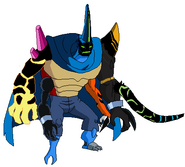 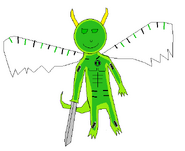 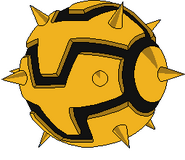 A combination of XLR8 and Benvicktor. He is very vicious.

Wildmutt and Benvicktor fused together. He and Cannonvine are the most powerful of the group. With Benvicktor's smarts, sight and electrical powers fused with Wildmutt's strength and smell he is extremely powerful.

One of the leaders of the group. He isn't as strong as ViktorMutt of CannonViktor but his additional powers make them tremble with fear.

The scariest, freakiest and most powerful of the group. Sure he has no leadership but with his strength he could overcome ViktorVine. Ofcourse, he will have to watch out for StinkViktor...

The leader of the group. He has more leadership than ViktorVine. Although he lacks physical strength, his electricity and goop mixed together are the ultimate combination to stop CannonViktor, XLRViktor and he can even trap ViktorVine and ViktorMutt.

Kross was originally very good hearted but very shy, then one day he went terribly insane from Clockwork's DNA. He was originally a fusion of Ult. Cannonbolt, Eatle, and Clockwork, but was mutated into a fusion of Ripjaws, Echo Echo, Wildvine, Chamalien, Brainstorm, Swampfire, Spidermonkey, Big Chill, XLR8, Goop, Diamondhead and Ghostfreak before the show started. He thinks that everyone that is not loyal to him is evil and must be destroyed. However, he is shown to have mercy to children and those who are being bullied and such, due to having being bullied when he was little. He also has a powerful sense of honor and will only fight when all innocents are out of range of the fight. He commands an unnamed team.

A fusion of Goop and Ultimate Echo Echo, he is the most loyal of Kross' team. He is also very suspicious of his other teamates and often wonders if they even listen to Kross. He is Kross' second in command

A fusion of Ultimate Swampfire and Ghostfreak, he is the most untrusted of Kross' team. He is very cold-hearted and will do anything to complete the mission, even if it means attacking his own team.

A fusion of Highbreed and Ultimate Spidermonkey. He follows orders from Kross only and covets Zark's position. Because of this he is reckless and will do anything to gain favor in Kross' eyes.

A fusion of Benmummy and Big Chill, he is the most mysterious of the group. He folloes orders well, but it is unknown what his motives are.

After Dan switches fusions, he becomes villanous. He becomes a fusion similar to Ultimate Kevin. He has red eyes. He is arrogant, cocky, and mysterious. He will never become good again. He is best friends with Ancy, and they ususally team up.

Throughout the series Ancy goes and joins the dark-side. Not much changes about his appearance or powers except he gains a diamond arm and purple eyes.

A fusion of Jury Rigg, Echo Echo, Jetray, Stinkfly, and BPMamba. More info is yet to be revealed. 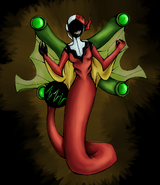 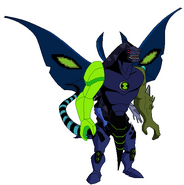 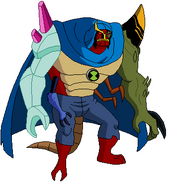 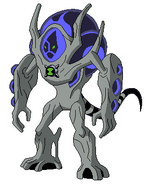 Evil Solo
Add an image to this gallery

Retrieved from "https://ben10fanfiction.fandom.com/wiki/Omni-Spore?oldid=674307"
Community content is available under CC-BY-SA unless otherwise noted.