Omni-Spell Forms are a free use Omnitrix gimmick created by Alanomaly.

The Omni-Spell forms play off of the original alien's powers but with magic involved. Each Omni-Spell form gains a type of magic based around the original power. For example, Omni-Spell Four Arms plays off of Four Arms' combat abiliites by giving him magic-based combat, enhancing all of his melee moves with his new magical powers.

The Omni-Spell forms are activated in a similar manner to the Ultimate forms. The user simply hits the Omnitrix with the intent of activating the form. The Omnitrix will then glow pink with magic before creating an energy wave over the alien that changes its form to that of a Ledgerdomain rock monster with pink magic glowing out of its body. 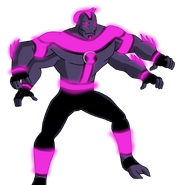