Omni-Enhanced Spidermonkey retains some elements of his Earth-2018 look. However, most of his body, mainly his torso, is covered in Fulmini rock armor. His forearms are also covered in this armor, and there is some on his legs, as well. The moss on his torso armor takes on a web pattern. His tail has changed shape and is now made of energy. His forearms and fingers are also made of energy, and the web design from his fur has carried over to his forearm armor, though now giving off the glow of the energy. He has two sets of giant spider legs coming from his sides made of his Fulmini energy. He wears the Omnitrix on his chest.

If Omni-Enhanced Spidermonkey appears in your series, add it here! 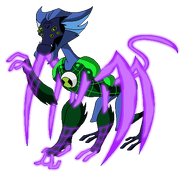 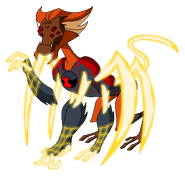