Omni-Enhanced Jetray takes on an appearance mostly similar to his original self in terms of body shape. However, almost all of his body is covered in rock armor, as it covers his torso, arms, head, and he has some armor on his calves. His crest, wings, gills, feet, and part of his tail are Fulmini energy. His tail has an anchor-shaped piece of rock armor on the end of it. He has moss replacing the black markings on his chest/back and his face.

If Omni-Enhanced Jetray appears in your series, add it here! 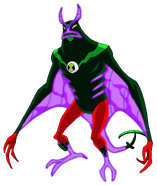 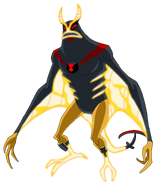 The Alan 10 Adventures Enhanced Jetray.
Add an image to this gallery

Retrieved from "https://ben10fanfiction.fandom.com/wiki/Omni-Enhanced_Jetray_(Alan)?oldid=866042"
Community content is available under CC-BY-SA unless otherwise noted.