Omni-Enhanced Gutrot appears like reguar Gutrot, though most of his clothing, his shoulder nodes, and his head are now covered in Fulmini rock armor. The insides of his nodes, the entirety of the nodes between his head and shoulders, and his innards are made of Fulmini energy. He has two small nodes near the Omnitrix that give the look of a gas mask. There is a rectangular panel made of Fulmini energy on each of his forearms.

If Omni-Enhanced Gutrot appears in your series, add it here! 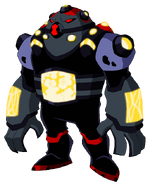 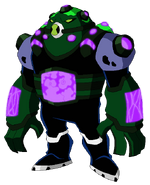