Nighthowler (interchangeably known as "Night Howler") is the Omnitrix's DNA sample of a Totanium War Machine from the planet Kubran 11. He is a free use alien.

Nighthowler is a humanoid jackal wearing plate armour all over it's body. The only parts left exposed are its ears, muzzle, arms, and stomach.

However, this is not true. Nighthowler is actually living armour capable of generating shadow constructs. It uses this powers to generate a more easily recognisable body for itself.

Nighthowler's main ability is his shadow construct manipulation, which allows him to make things out of shadows and control them. Most of his body is made of shadow construct. These shadows act similarly to a hard-light hologram system, except with shadow instead of light.

Nighthowler also possesses enhanced senses. This has nothing to do with his jackal-like appearance, and gives him enhanced hearing, smelling, and sight.

Because Nighthowler is literally living armour, he is much more resistant to attack than other creatures.

The shadow constructs making up parts of his body seem to be able to feel pain. If these parts become damaged by light, it feels like an intense burning.

Nighthowler is a free use alien, feel free to use him in your own series

Nighthowler is planed to appear in season 3. 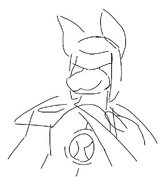