Nemevoc is a Human from the planet Voltoron in Bryce Bowman: Origins.

Looks like a normal human, in general. He has pale skin, grey hair, which is a common thing among Voltoranian Humans, and blue eyes. He wears a black shirt, with purple trim, a grey jacket, khakis, and black dress shoes. Nemevoc wears the Negafinity on his left forearm.

Nemevoc was found by Azmuth as a young boy and taken in to be trained as an apprentice. His best friend from the orphange, Amsol, lived in Azmuth's tower as well. Nemevoc helped Azmuth develop the Infinity, first starting with the prototype known as the "Ultimatrix". When Nemevoc discovered that Azmuth had given the Infinity to Bryce, he became furious, feeling that he deserved it as Azmuth's life-time partner. Then, with the help of Amsol, Nemevoc stole the Ultimatrix's core and fled to Earth. There, he used an old Techadon Battle Armor gauntlet and, using his knowledge gained from being taught by Azmuth for nearly twenty years, retrofitted it to host the Ultimatrix. Amsol helped him steal any components he needed.

Originally, Nemevoc's goal was to use the Ultimatrix to defeat Bryce, proving himself more worthy of the Infinity, then have Azmuth give it to him. After being beaten by Bryce on more than one occasion (and losing a bit of his mind from being under Death Dragon's influence), his goal became to kill Bryce and take the Infinity and use it to kill Azmuth and his own parents that had abandoned him as a child. 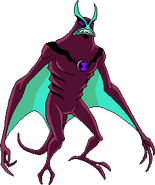 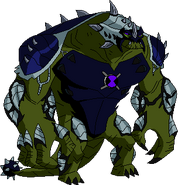 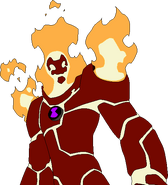 Nemevoc as Bootleg; Requested by Steve 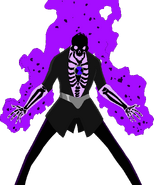 Nemevoc as Fallout
Add an image to this gallery

Retrieved from "https://ben10fanfiction.fandom.com/wiki/Nemevoc?oldid=903445"
Community content is available under CC-BY-SA unless otherwise noted.