The Negative Ultimate Omnitrix, often referred to as the "Ultimatrix" or the "Negafinity", is an Omnitrix used by Nemevoc in Bryce Bowman: Origins.

The Ultimatrix was Azmuth's original design for the Infinity that he worked on with Nemevoc's help. After deciding it wasn't powerful enough to trap Death Dragon, he scrapped it and tossed it into his vault. Years later, after becoming angry with Azmuth for sending the Infinity to Bryce, Nemevoc stole the Ultimatrix and ran from Azmuth's laboratory and his own home. He later refitted an old battle gauntlet to house the Ultimatrix (given his skills and knowledge learned from Azmuth in addition to his higher intelligence this was relatively easy). He then turned the colors to white and purple to spite Azmuth.

The Ultimatrix is a white, metal gauntlet with an Omnitrix core over the wrist. It cuts off about half-way up the fingers. The Ultimatrix covers Nemevoc's entire forearm. Nemevoc flipped the colors on the faceplate as one additional "screw you" to both Azmuth and the Agency by distorting their Intergalactic symbol of Peace.

We know that the Ultimatrix has most the same forms as Bryce unlocked, so this will be a list of aliens forms that Nemevoc has used.

There are a few transformations that Azmuth has managed to lock remotely from the Ultimatrix. 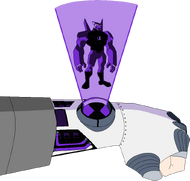 The Ultimatrix displaying a hologram