Natasha Romanoff is a Human from Earth, Dimension 616, in Bryce Bowman: Devil's Bounty.

Natasha is a fairly tall Caucasian woman in her prime with short red hair, hazel colored eyes, and long shapely legs. She is considered very attractive and sports a slender, yet curvaceous, muscular frame with a well-toned and muscular build. She commonly is seen in a form-fitting black jumpsuit which highlights her form. Combined with this attire, she wears a utility belt to carry her various tools and spy gear and a pair of black gauntlets on each wrist.

Natasha first appeared in The Avengers when she helped defeat Bryce

Natasha is relatively reserved about her feelings, having grown up as an assassin and worked as such for most of her life. She seems to be close with Clint, having a history with him, though not a romantic one. Clint could be called her best friend, but she doesn't form relationships very well.

Bryce and Natasha seem to understand each other, both being assassins for bad people. They get along, and are friendly, but they are not likely going to develop their relationship into anything romantic.

She has been rigorously trained to near-superhuman conditioning, most notably in the areas of speed, strength, agility, reflexes, intelligence, instincts and stamina. She is a highly trained martial artist, spy, and gymnast, making her a valuable asset on the battlefield. She is also a master of disguise and espionage. She utilizes all of her talents and much more when working for S.H.I.E.L.D. as a field commander or special-ops agent and as a member of the Avengers. 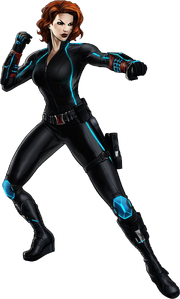