Nanomech is the Omnitrix's DNA sample of a Nanochip from the planet Ninomishanika set to appear in Bryce Bowman: Devil's Bounty.

Nanomech is only a couple centimeters tall at his regular height. His skin is all silvery metal with some black accents and blue lights on his arms, shoulders, and collar.

He has four wings surrounded in blue energy.

He has four, small eyes on his head.

The Omnitrix is in the center of his forehead.

The Omnitrix transforms into hundreds of nanochips and begins spreading up Bryce's arm. His face is totally covered by the nanochips then they morph into Nanomech's face. The nanochips form wings on his back and shift his legs into Nanomech's. He flies forward, holding blue energy charges in his hands.

Nanomech is capable of flying, thanks to possessing a pair of wings. He is very agile and his wings glow when he is airborne.

Nanomech can reduce his size at will, even to microscopic scales. He can return to his original size, but cannot grow any larger.

Nanomech can launch blue bioelectrical energy from his hands and eyes, ranging in forms from beams to orbs.

Nanomech has the ability to adapt to his opponents very fast.

Nanomech's adaptability allows him to understand the functions of machinery and tech, and use that information to make them malfunction and break in a matter of seconds.

Much like Grey Matter, Nanomech's minuscule size can be a problem if fighting larger opponents.

Because he is extremely light, Nanomech can easily be blown back and immobilized by strong winds.

Even though Nanomech cannot be controlled by Nanochip Queens, he can still be partially influenced by them.

Nanomech can be harmed by magic. 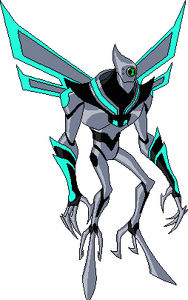 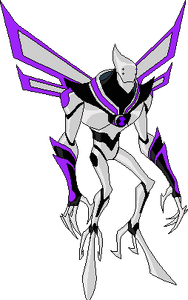