NRG is the Omnitrix's DNA sample of a Prypiatosian-B from the planet Prypiatos, in the Andromeda galaxy, set to appear in Bryce Bowman: Devil's Bounty.

NRG wears a lower level containment suit consisting of two straps, a belt, two wristbands on both arms, and two knee braces on both legs.

While in his armor, NRG wears the Omnitrix symbol on its chest seal, but he doesn't wear an Omnitrix badge on his true form.

Bryce pulls his hand back from the Omnitrix, slowly, as it heats itself and his arm rapidly, beginning to glow red. The glow takes over Bryce's whole body, he spins, slowly, the heat intensifying and finally bursting with radioactive flames. Then, clunk, a grey suit closes over Bryce and locks with a massive seal. NRG poses with his arms back, firing a blast of radiation into the sky.

NRG is capable of firing highly radioactive energy beams through the vents in his containment suit which can corrode or melt metallic objects. The energy NRG radiates is hot enough to melt solid metal and rock through mere contact. This energy can also be found in his saliva.

NRG can channel his heat underground, which results in the eruption of massive geysers of lava.

NRG is capable of producing his radioactive energy with his hands while inside his suit.

Because the containment suit is made of metal, NRG is immune to being possessed by a Lucubra.

NRG is able to easily open the suit and get out whenever he wants to, but he chooses to stay in the suit for the safety of bystanders.

NRG is immune to radiation and extremely hot environments.

NRG's radioactive energy can melt ice, such as the ice breath of a Necrofriggian. He is also immune to extremely cold environments thanks to the heat he generates.

Outside his containment suit, all of NRG's powers are enhanced massively. He becomes very agile and gains both flight and limited phasing abilities.

Without his containment suit, NRG can manipulate energy at a higher level and is able to consume it simply as nourishment or to increase his power. He can also fire energy balls and blasts out of his hands and mouth.

NRG can make himself glow like a light bulb, which is bright enough to weaken Ectonurites.

NRG can grow in size if he absorbs and consumes enough energy.

Due to the dangerous radiation his body gives off, NRG must stay in his suit for the safety of others and keep his radiation level to a minimum. There are, however, downsides to this, as most of his abilities become weaker than outside of the suit.

Taydenite is the only known element that can damage NRG's suit, outside of the suit itself, but it's likely that beings like a Thyrsus could be strong enough to force it open.

The eye holes in NRG's suit are quite small, making his vision somewhat limited. He can be blinded even further by adhesives.

NRG is vulnerable to carbon dampening rods because they can slow down nuclear reactions, thereby inhibiting the radiation he generates.

NRG's radioactive blasts are ineffective against a Aerophibian.

With NRG's only Omnitrix symbol being on the containment suit, he must reach it to use most of the Omnitrix's functions, including the Quick Change or Ultimization.

NRG's powers can be neutralized by a Prypiatosian-A's abilities colliding. This also effects Megaton in the reverse. 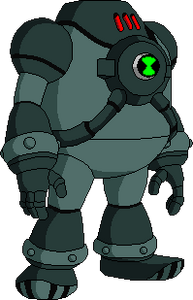 NRG out of his suit 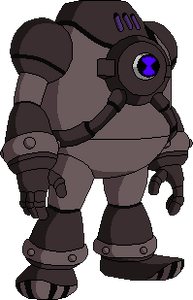 NRG flying out of his containment suit