NRG is the Omnitrix's 1.5 DNA sample of a Prypiatosian-B from Prypiatos in Ben 10: Omnitrix Unlimited. He is the Dimension 1 equivalent of NRG.

Before the Omnitrix's 1.5 recalibration in Ben 10: Across the 23rd Dimension, NRG had his Omniverse appearance for his true form. His containment suit is the same one from Omniverse, but without the bolts and the handle.

Since Highbreed Invaded: Part 2, he only appears in his true form, because his containment suit was destroyed by Vilgax.

NRG appears in his true form, as shown in Omniverse.

Negative NRG has NRG's Omniverse appearance, but his containment suit is light grey. 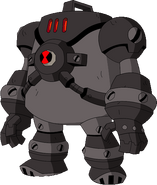